Game of Thrones RPG (no spoilers)

Just last week the new Game of Thrones RPG was released. After looking at reviews and trailers I went out on a whim and brought the game.

In the game, there are two leading characters which have their own separate story-lines at first until later in the game they merge. This is a very interesting technique, and the developers have used this to great effect. Often creating cliff hangers to make you really want to see what happens next.

The two main characters are:

Mors the knight from the Night's watch. Whom receives a request from the King's hand. (Currently Jon Arryn, who died at the very start of the first book)

Alester a man who ran from his duties at the first born son and became a Red priest.

Through out the game your also explained events about their past which really adds depth to the characters.

Sadly, the rest of the game is a shocker. The combat is largely just picking the enemies off one by one. There is very little tactics. Although, the game does try hard by introducing skills that have extra effects depending on the enemy's status. Ie, If enemy is bleeding an attack may do extra damage. However to actually cause these effects (like bleeding) is unlikely. If not impossible most of the time.

The graphics, whilst they look terrible, they also look as though the developers have taken the time to read through the book and recreate the imagery as much as possible. The North really does give you the impression that its a horrible place to live.

The only decent voice actor so far is Varys voice acted by the actor who plays Varys.. But he does a fantastic performance. The rest of the acting is shocking however. Really just terrible, I've found myself spamming space bar as soon as I read a sentence just to avoid listening.

On the whole, The Game of Thrones RPG is decent. But only if you already love the books and don't mind playing through boring sections of combat just to get to the juicy story.Its a shame, their are some fantastic moments in this game but its not a AAA title and lacks polish. So really, wait a few months, and buy this for sale on STEAM.
Posted by Toastman at 4:49 AM No comments:

I'm just interested in knowing what you think of my writing skills, don't be afraid to let loose, I'm just looking for honest constructive criticism, for understanding on what to improve. So leave a comment below, it'll be much appreciated!
Posted by Toastman at 5:56 AM 2 comments:

Glitch is a casual MMO by Tiny Speck. Now, often gamers shudder when they hear MMO and Casual in the same sentence. My self included, until Glitch I only ever thought of these casual games in the same vein as Facebook and many iPod games, with utter disgust and contempt. Glitch is honestly a fantastic game. Something to pick up and play for 30-60 minutes. Although that often turns into several hours.

Glitch has absolutely no combat. That closest you get is PvP 'games' with goals like capture the flag or King of the Hill. Instead it prides itself on crafting and recently, housing customization. The crafting is honestly the best I've played. Ever.

You are automatically given crafting recipes depending on skills that you've learnt ( These skills are learnt with the same skill system as EVE), and often these recipes contain multiple steps.

For example, to make a bed, you need:

Now, the boards are made by cutting down wood trees, which give you planks, you can then use a wood machine to craft these planks into posts and boards.

The snails are made by mining metal rocks. The metal rocks are then made into metal ingots, these ingots are fed to a Sloth. yes, a sloth. Which chew the ingots and spit out snails for you.

The fibres are gained by brushing foxes. You bait the foxes in specific parks or reserves and then brush them. They can then be crafted in fabrics and fibres.

Then you combine these items with a construction tool, and viola! Bed is made. This can be placed in your player owned house for your own pleasure or sold. 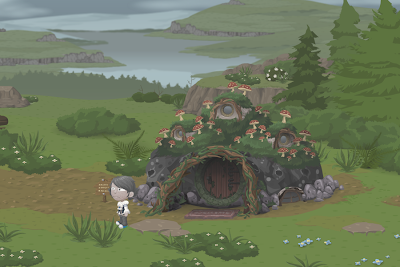 This is just one of many actives Glitch offers, other examples are:

-You can create your own garden, with crop plots, trees, firefly hives and more.

However, what truly makes this game great is, the 'imagination' system. Instead of gaining EXP, you gain Img from almost every activity in the game. Img can be used to either buy 'upgrade cards' which are passive abilities and buffs for your characters, or 'imagine' usable garden items.


Intrigued? Curious? Well, great! Give it a shot, it may interest you, and in addition, it is 100% free, the only items you can purchase are costumes for you character and 'furniture upgrades' which improve the looks. The latter of which can be brought in game from other characters.

How do you add a Blog Roll?

Just a simple blog related question. How do you add a blog roll to your blog? I love blog rolls, and have subscribed to many interesting blogs because of it., and would like to add one to my site for that purpose. Sadly, I have been unable to find out how to add it. Any help would be lovely. :)

Also, what about you, do you find blog rolls a necessity for your own blog, or blogs you read?
Posted by Toastman at 7:26 PM 4 comments:

This is the sound of my heart beating a thousand times a second.

I had just joined a small gang with the Red Federation, and had been camping a gate for just a few minutes, when our scout alerted us to an incoming attack. Suddenly the Blue attacked.

BOOM. BOOM. BOOM.
\
My hands were sweating, and fearful of a heart attack from the sheer excitement of my first pvp match.
They had the numbers and better ships. I locked onto their Cruiser, orbiting at 500m with my afterburn on, while I applied my webbifer on it. It tried persistently to attack me, and fail completely. It went boom. Their 2 frigs were also shot up in flame. One tried to flee, but I managed to get a lock in time and scram/web it. Although us to destroy the frig easily. The other, went for our rifter, and managed to destroy it, before he himself, went boom. Then it happened. The destroyer got a lock on me. Ahh, damn. i applied all my tanking modules praying that I would survive long enough to begin orbiting, at which point he would be helpless against me and my gang. I succeeded.

Then I popped. He had equip short range autocannons, removing my ability to speed tank him. I went pop within seconds. But the damage on the destroyer was enough. We killed it.

They numbers. We had luck. I had a great time.

Sure, I may be using a rookie ship, Since my destroyer got killed within seconds because of a drake. Sure, I may have contributed exactly 0 damage to the fight. But guess what, it still counts. =P
Posted by Toastman at 6:56 AM No comments:

First Week And a Bit Of EVE

Great week of EVE. Initially I sought to find a low or null sec corp that used the AU time-zone, sadly I was out of luck as their was only a handful and all required at least 5million Skills points (Skill points are trained in real time, even when your not playing, and simply advance your character depending on the skill being learnt.) So that was out of the question. I had to settle for a high sec care-bear corp, that ran frequent mining corp runs. The mining was a bit dull but was making me a couple of million ISK per day. So far good. However, just last a few days ago, during a mining corp we were attacked by a new corp member and his friend.

It was quite exhilarating, I had just spent 10 million on a new mining ship + fits, and had no way to replace it easily (I completely ignored Rule Number One of EVE: Only fly what you can afford for the first and only time) but I got out just in time. My corp mates weren't so lucky, 2 Hulks, 1 Retriever and an Orca were lost.

About 5 minutes after I screamed out loud like a hooligan, "NO MORE TO MINING, I WANT TO PVP" and joined the fantastic Red Federation of RVB. Which is one large corp that are constantly at war with each other. Although do ally to fight any 3Rd party war declaration. So far I'm loving it, I'm trained to fly a Rifter effectively enough that I can hold my own and even though I live in Australia I still see plenty of action, and as I type this there are rumours that the damned Blue Republic are gathering a large fleet of Frigates and Cruisers to camp our home system!

RVB is fantastic fun, am I losing millions and millions of ISK? Yes. Do I care? Hell no. I recommend RVB to every new player, and even recommend it to veterans whom are looking for a frequent buzz from PVP.

UPDATE: There was a HUGE battle, sadly I just missed it, by a few minutes =( Will link more information about fight when available.
Posted by Toastman at 4:55 AM No comments: